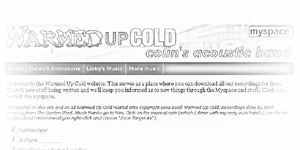 Warmed Up Cold was the band in which Brad cut his teeth. He used them to open too many beer bottles.  Much bonjela occured.

The core of WUC was Helen Johnson and Brad. The band played literally tens of gigs in between 2003 and 2008, including main stage of Strawberry Fair, the Gwydir Street party, ARU student bar to a bunch of miserable Carter USM fans, and the quite dreadful Devonshire Arms to a bunch of quite disinterested reggae fans.

Bongos for a time was provided by Robin Longdin, Mandolin by Ian Minors.  Two EPs were produced by Michael Crossley.  None given a name or formal release, but the tracks do exist and have been stolen by Chinese website Baidu's automatic web crawler more times than you've had hot dinners.  Yes you.  The 101 year old well fed person.